Iodine and selenium supplementation in ewes

Improving your lambing percentage is one of the keys to attaining higher sheep farm productivity and profit.  A successful mating period boils down to three essential elements:

The trace element status of ewes in the pre-tup period can have profound effects on their ovulation rate and the implantation and survival of their embryos through pregnancy, as well as the health of the newborn lamb.

Iodine is an essential mineral required to make thyroid hormones.  The hormones produced control the body’s metabolism and temperature and they are required for bone, brain and wool development of fetuses.  A very iodine-deficient ewe may abort in late gestation or at full term, while a live lamb deficient in iodine frequently will have an enlarged thyroid gland and may be born small or weak and have little or no wool.  These lambs are very susceptible to starvation/exposure.

Goitre may not always be obvious, and it is advantageous to check thyroid weight:birthweight ratios on the dead lambs, particularly if you find there are more than usual. If the thyroid weight is more than 0.8g/kg of lamb weight, iodine deficiency is occurring.

Ratios less than 0.4g/kg rarely occur among flocks that are deficient in iodine.

Between 0.4 and 0.8 is a grey area where flocks may benefit from supplementation, but no further satisfactory iodine tests are available. This is therefore best assessed on an individual farm basis with supplementation trials and taking into account the wintering practices and the feed the ewes will be on during pregnancy.

Different feeds have varying amounts of iodine available in the plant; brassicas are usually low in iodine as well as containing goitrogens (also commonly found in white clover) which prevent iodine uptake by the ewe.  It is common advice to iodine supplement any ewes being fed brassica crops in the second half of gestation, preferably prior to being started on the feed.

For pregnant animals grazing pasture alone the situation is more complicated, because pasture iodine levels and their uptake by animals are variable from year to year and goitrogen-containing clover may be present. There is a link between soil ingestion by ewes and a lower incidence of goitre in lambs, as may occur in a drought or on highly-stocked paddocks, but this can be unpredictable.

Forage tests alone for iodine levels are not  sufficiently sensitive indicators of whether deficiency will occur in the ewe/lamb, but pasture containing 0.25mg iodine/kgDM should be adequate. Blood tests can be done on ewes to assess iodine status; however this also is not as sensitive as thyroid weights and will change depending on the feed type.

Farms with thyroid weights between 0.4 and 0.8g/kg and ewes being fed pasture alone are the ones that would benefit the most from trialling supplementation to detect iodine deficiency and thus decide whether there is a benefit from treatment.

Iodine supplementation of the pregnant ewe is commonly carried out  by use of iodised oils or potassium iodide drenches.

Iodised oils such as Flexidine are usually more efficient and are given as a single injection 3-4 weeks before mating. This has been shown in studies to increase iodine status for up to 200 days.  Oral drenches such as LSD have a shorter length of action and can be given pre-tup, 8 weeks and 4 weeks pre-lambing to prevent goitre.

In many cases, a trial is the best assessment of the effect of iodine supplementation.

A frequently-used experiment involves injecting half of a 500-ewe flock with Flexidine and ear tagging them, running them together until set-stocking prior to lambing, then comparing lambing percentage at tailing.

Following supplementation, many farmers report no difference in scanning rates but improved survivability in lambs.

Selenium is the other major mineral associated with fertility in sheep.  While deficiency premating may not affect conception rate, it can cause fetal loss in early pregnancy. Sheep are more sensitive than cattle to selenium deficiency-induced fertility.

The need for selenium is well understood by farmers, and it is present as short-acting formulations in many drenches and as short-acting injections either alone or with vaccines.  Consequently, the clinical problems caused by selenium deficiency, such as white muscle disease, are not commonly seen anymore.

However, the use of short-acting products can leave stopgaps within the system where deficiency and its associated unseen effects can occur. Depending on your system, long-acting supplementation with a sustained mineral release may benefit your livestock. Fortunately, selenium levels are easier to assess than iodine levels, and they can be done via blood tests and liver samples through biopsy or at slaughter.

If you want to know more about your flock’s mineral status, or want to discuss exploring whether there is room for improvement within your reproduction plan, contact your Vetlife veterinarian. 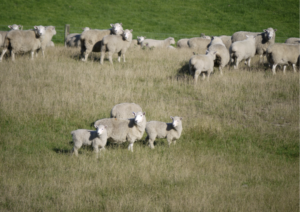