Management of the ewe hogget pregnancy

In-lamb ewe hoggets are a priority class over the winter because feed levels must meet the liveweight gain requirements of the hogget as well as the needs of the fetus and mammary gland. Management strategies must ensure maximum production of both hogget and offspring to weaning and not compromise two-tooth breeding. Feeding during pregnancy must ensure weaning of an adequate lamb but also enable weight gain in the hogget herself. This needs to occur throughout the pregnancy as it is very hard, due to the demands of the fetus, to gain bodyweight in the last trimester.

Assuming a 4-5kg birthweight, the total pregnancy weight gain will be 9-10kg just before lambing. If the mating weight was 40kg and we want the hogget to be 50kg the day after lambing, then she needs to gain 20kg during pregnancy which equates to about 130g/day over the entire pregnancy. For twins the actual pregnancy will be 12-13kg at term. To achieve these gains, hoggets need pre-grazing levels of at least 1400kgDM/ha and residuals above 1200kgDM/ha (approx. 3cm sward height). Various winter crops can be used, but care should be taken to ensure they are not grazed to low levels, are good quality and supplemented with baleage. Because hoggets are often on brassicas for longer, it is important to give them iodine supplements.

Fetal growth is primarily under genetic control rather than nutrition so, as the fetus is pre-destined to be within a certain weight range, dystocia is an issue when the hogget is not well grown. If the hogget is fed well in early/mid pregnancy her bone structure (including pelvis) will be larger and less prone to dystocia (assuming appropriate male genetics have been used).

Lamb losses decrease by about 3% per 1kg liveweight gain in the range 4-10kgs due to better placental development and hence birthweight, ease of birth, increased lactation and improved mothering ability. Liveweight at mating and at day 50 have the biggest impact on the hogget and her offspring’s performance.

Scanning will allow identification and differential feeding of dry, single and twin-bearing hoggets especially now as percentages continue to improve.

Shearing of mature ewes in mid-pregnancy (60-100 days) increases lamb birthweights and survival, especially multiple-bearing ewes. It appears that, in hoggets, it may increase single birthweights but not twins. This increase in singles` weights, without a corresponding gain in hogget size, will possibly lead to increased risk of dystocia. In ewes, the response typically occurs in good condition multiple-bearing ewes which are then able to divert body reserves to the growing fetuses – however hoggets carrying twins are unlikely to have significant reserves. The increased birthweights enable lambs to cope better with inclement weather, but this is less of an issue due to later lambing dates in hoggets.

Pregnant hoggets need a drench and vaccination plan at pre-lambing, and this should be drawn up with your local Vetlife vet as these animals are often under stress over lambing. 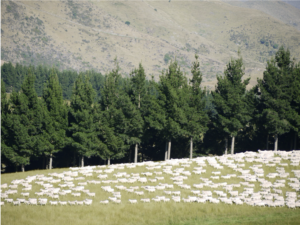