After weaning, sometimes our calves, sent off to run-off blocks,  can get a little forgotten, and all the hard work you have put into your replacements can easily be lost if effort is not made to monitor them.  All too often in the summer, we are called to see sick R1s, and, nearly always, the cause is something that could have been prevented.

The graph below is a reminder of why it is so important not to forget our R1s.  This research was conducted by Rhiannon Handcock from Massey University last year, and the graph represents over 140,000 heifers’ weigh data. If you focus on the blue line on the left, this shows how much milk heifers produce in their first lactation in relation to what they weighed when they were 3 months old.

Therefore, a heifer that weighs 50kg more at 3 months will give approximately 40kgMS more than her lighter counterpart.  A similar relationship occurs as they get older, and the effect is usually stronger the younger they are, so it is not good enough to grow them poorly in their first year and catch them up in their second year. 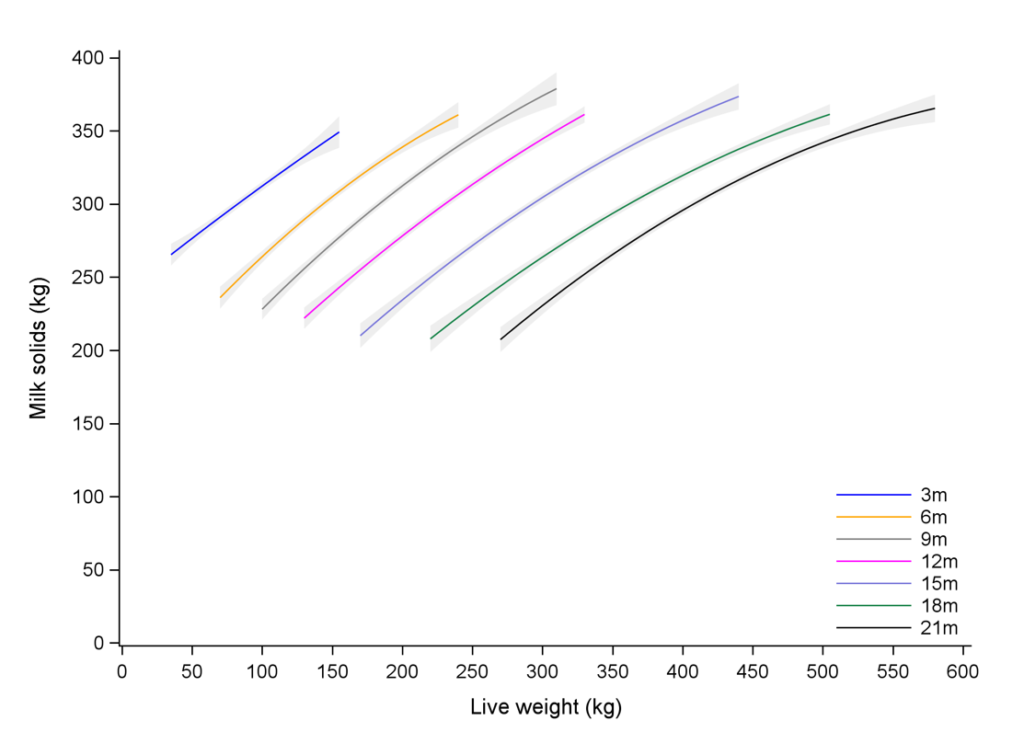 How can you ensure ALL your heifers are grown well to optimise milk production later on?

Firstly, whether you look after the calves yourself or someone else is at a run-off, a monthly weighing programme is essential.  Any longer between weighs can mean a drop in growth rates is missed.  Weighing allows you to identify the number of calves below target.  ‘% below target’ is what we need to focus on, NOT the ‘average weight’ as many do.  If you have >10% below target then you should be looking into the reasons why – it is very achievable to have 0-2% of your calves under target by January if they are also fed well before weaning.

The monthly weigh often fits in well with your drenches.  Whether you are on irrigated land, how heavily stocked the land is, and if other stock graze it, are all factors that may affect your drench intervals, so please do ask us how often and with what you should be drenching.  As a rule, oral drenches are best for gut worms in dairy heifers, for as long as you can manage to drench them. Depending on your area, we may also need to add in a pour-on or injectable drench that has persistent action against lungworm.

Trace elements, especially copper, selenium and cobalt, will need to be given, and if you have not tested the animals it is best to check by doing some bloods and/or liver biopsies as every farm will be different.  Supplements come in many different forms (eg mineral licks, prills, dosatron mixes, injections, boluses), and it is best to discuss with your vet which would be best for you.  The majority of ‘sick calves’ we see in the summer also have a concurrent trace element deficiency; this results in them having poor immune systems which is often why diseases such as Yersinia (bacteria causing scours) gain a foothold.

Coccidiosis is another condition we see frequently in calves from August to November.  Coccidiosis is caused by a parasite which damages the intestines. Eggs can last 2 years on the pasture, so we see more of this disease where calf paddocks have been grazed repeatedly over the years.  Calves with scour patches on their backsides and coats that do not look as glossy as usual may have cocci.  We can identify cocci with a simple faecal egg count test.  The impact on growth rates can be huge, so prevention early on is recommended.

A youngstock health plan can be invaluable to ensure that you do not forget to give the animals the essential treatments described above, and it gives you that opportunity to discuss which options will be best for you.  Book in a visit with Vetlife soon, to ensure your R1s will get the best care they can have over the coming year.